We know that there are Otters in and around the Foss, though reports of clear sightings are few. Most of the evidence comes from field signs and unfortunately from road-kill.  If you do see one clearly, or better still if you manage to get a photo, please let us know! We have recently (December 2021) found Otter prints on one of our mink rafts near the link road. 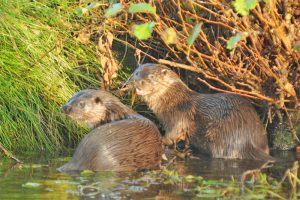 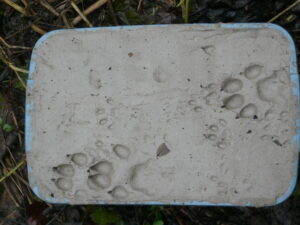 Otters need the sort of plentiful food supply which comes only from good water quality with a variety of habitats to cater for their needs all year round, including secure, undisturbed breeding and resting sites close by.

They do seem to be very vulnerable to accidental mortality such as road deaths. Although Otters are elusive creatures and not often seen, signs of their presence can be found in the form of otter spraint (the sweet smelling, black tar-like droppings made up predominantly of fish bones and scales, which are deposited in prominent locations to mark their range); footprints on sandy or muddy riverbanks; and suitable lying-up sites.

Otters are larger and broader than American mink and have paler grey-brown fur, and a pale chest and throat. The spraint of mink is much fouler smelling, and tends to contain more mammal hair/bones.

The Otter is a carnivorous mammal and the limiting nature of their food supply means that they can have very large home ranges, typically 10 – 25km for females and 25 – 50km for males. Female ranges are thought to overlap whereas males’ are territorial. This need for a wide geographical range means that a catchment wide approach is essential to otter conservation. 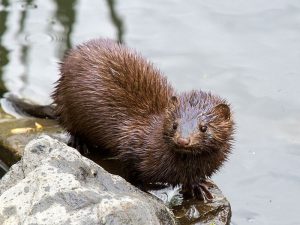 These are small carnivores of the mustelid family. Inside this beautiful looking creature lurks an indiscriminate killer: they eat a wide variety of principally water-side animals – anything from small frogs and fish to moorhens and water voles which, confined to a strip of riverside habitat, have proved to be very vulnerable. Their population has plummeted since the 1990s!

Mink can be mistaken for Otters, but are smaller, more ferret sized, usually having dark brown fur, which looks black when wet, as well as small, variable white patches on chin, throat, chest and groin, more evident on a carcass. Their tails are short and fluffy.

The mink found in Britain is an American species. It was an accidental addition to the British fauna in the 20th century, the result of animals escaping from fur farms in quite a few different regions, not as a result of misguided animal activists releasing them as is often stated. Since 2000 fur-farming has been prohibited in England, but still carries on in some European countries, where escapes continue.

With no natural predators in the UK and despite their recent introduction, mink are now relatively common – unlike some of our native carnivores. In 2000 there were estimated to be roughly 110,000 in Britain – but one should add that there is no easy way to estimate the population!

Mink are now seen regularly on the Foss with many recent confirmed sightings and we are pretty sure that we have at least one territory in the New Earswick area. Some form of control is going to be necessary if we want to keep our water vole population in being. (Photo by Needsmoreritalin (Own work) [CC BY-SA 3.0 (http://creativecommons.org/licenses/by-sa/3.0)], via Wikimedia Commons) 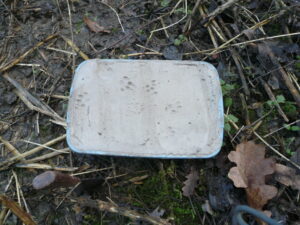 Now very rare along the river, they used to be quite common. Their decline is doubtless connected with the increase in mink numbers recently. Look out for typical signs of voles such as burrows in the riverbank, often with a nibbled ‘lawn’ of grass around the entrance. They like to sit and eat in the same place, so piles of nibbled grass and stems may be found by the water’s edge, showing a distinctive 45° angled-cut at the ends. ‘Latrines’ of rounded, cigar-shaped droppings may also be seen.

Much bigger than other voles and distinguished from the larger Brown Rat by its chestnut-brown fur, rounded nose, small, rounded ears that do not protrude from the fur; they also have a furry tail. Water Voles live only 5 months on average in the wild, though as much as two years in captivity. 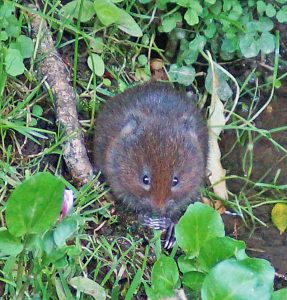 A water vole nibbles its feed at the edge of the Foss. Photo by Tony Ellis.

They eat grasses and waterside vegetation: 227 plant species have been identified in their diet, and additional broadleaved plants may also be eaten at certain times.

Water voles excavate extensive burrow systems into the banks of waterways. These have sleeping/nest chambers at various levels in the steepest parts of the bank and usually have underwater entrances to give them a secure route for escape if danger threatens. They tend to be active more during the day than at night. A typical male territory would be about 130 metres of water bank, while females have ranges about 70 metres long.