Kingfisher: Small unmistakable bright blue and orange birds living near slow moving or still water. They fly rapidly, just above the surface as well as hunting fish from riverside perches; occasionally hovering above the water. They are vulnerable to hard winters and habitat degradation through pollution or unsympathetic management of 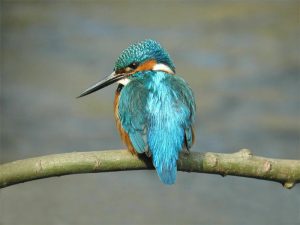 watercourses. Kingfishers are amber listed because their numbers are much reduced throughout Europe. The UK is home to about 4000 breeding pairs, some 5% of the European total.

Their diet is mostly freshwater fish and aquatic invertebrates. The hungry brood of a Kingfisher can demand over 100 fish a day from their parents, which they dive for at the surprisingly low speed of about 10mph.

food, or hunched down with their neck bent over their chest. Their diet is mainly fish, amphibians, small mammals, insects and reptiles. They have an unusual arrangement of 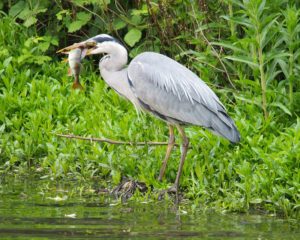 Grey heron on the Foss photographed by Martin Hathaway

the vertebrae in their necks (of which they have the same number as other birds), which form a hinge allowing them to spear a fish with astonishing rapidity. They like to nest colonially, and sites with up to 400 nests are known in the UK. Most heronries are in trees, with the majority of nests at least 25m above the ground; quite a feat for a large bird. However, reed-bed heronries are not unusual, and they will also nest on cliffs, bushes, sometimes even on buildings or bridges. In flight they are far more agile then you might expect.

Little Egret: The little egret is a small white heron with attractive white plumes on its 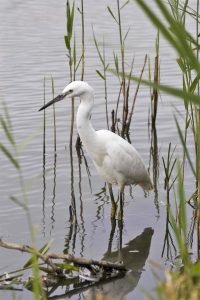 A Little Egret. Photo by John Harding, courtesy of BTO.

head, back and chest, together with black legs and bill and yellow feet. It first appeared in the UK in significant numbers in 1989 and eventually bred in Dorset in 1996. Its colonisation followed naturally from a range expansion intro western and northern France in previous decades. It is slowly spreading north as a winter visitor, though not yet a breeding bird in this part of Yorkshire. Their diet is mostly small fish, amphibians, large insects, and a wide variety of small animals.

Their elegant neck plumes displayed in breeding plumage were once more valuable than gold: smuggled into Europe they fetched £15 an ounce (approaching £1000 at current prices): with 30 Little Egrets being killed to produce each ounce.

Mallard: The Mallard is a large heavy looking duck with a longish 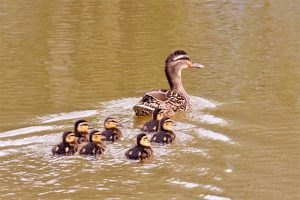 A female mallard with her ducklings. Photo by John Harding, courtesy of BTO.

body and a long, broad bill. The male has a dark green head, a yellow bill and is mainly purple-brown on the breast and grey on the body. The female is stripy brown with an orange bill. Mallards in the UK may be resident breeders or migrants – many of the birds that breed in Iceland and northern Europe spend the winter here. They usually feed by dabbling, eating the seeds of grasses and sedges and the leaves, stems, and seeds of aquatic plants. They will occasionally eat insects, crustaceans and molluscs, especially when young. Their nests are generally by the river, but can also be some way away from the water. They are highly gregarious outside the breeding season and form large flocks, which are known as sords.

The plain brown colour of the female is so different from the male that they were originally thought to be separate species; they are the original ancestor of most domestic ducks.

Coot: All-black and larger than its cousin the Moorhen, it has a distinctive white beak 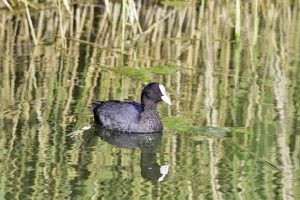 A coot on the water. Photo by John Harding, courtesy of BTO.

with a ‘shield’ above it. The male is noticeably larger then the female. Coots’ feet have distinctive lobed flaps of skin on their toes which act as webs when swimming. They patter noisily over the water before taking off.

Their diet is mostly aquatic plants, snails and insect larvae.

Coots are aggressive birds, both to other species and to their own kind; they have even been known to kill their own young, usually the youngest of the brood, if they have too many to feed successfully. 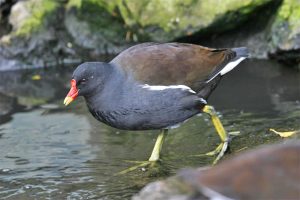 A moorhen. Photo by John Harding, courtesy of BTO.

Moorhen: Moorhens are black to brown with a red and yellow beak and long, green legs. Seen closer-up, they have a dark brown back and wings and a more bluish-black belly, with white stripes on the flanks. They eat water plants, seeds, fruit, grasses, insects, snails, worms and small fish while swimming or walking on floating vegetation or land with a liking for damp meadows.

The Moorhen is one of only two British birds which breed cooperatively, with the older offspring helping their parents raise their siblings. 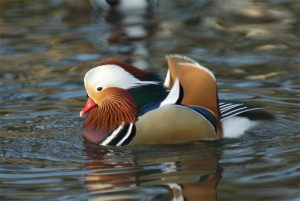 A mandarin duck. Photo by Neil Calbrade, courtesy of BTO.

become established following escapes from captivity. They can be seen mixed in with Mallards who are not fussy about their choice of mate – hence the many colour variations to be found! The male has ornate plumage with distinctive long orange feathers on the side of the face, orange ‘sails’ on the back, and pale orange flanks. The female is dull by comparison with a grey head and a white stripe behind the eye, brown back and mottled flanks. They eat plants, aquatic seeds and invertebrates, especially land snails and insects. Did you know that the nine levels of the Chinese Civil Service were named after birds? Mandarins were the 7th level: and it was they who dealt with British traders in China, hence the term for any bureaucrat. 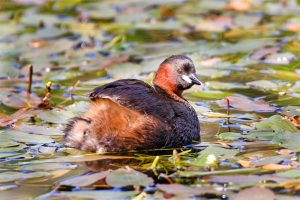 A little grebe on the water. Photo by John Harding, courtesy of BTO.

Little Grebe: A small, dumpy grebe which often appears to have a ‘fluffy’ rear end. It readily dives when disturbed, surfacing unseen some distance away. In summer it has a bright chestnut throat and cheeks and a pale patch at the base of the bill. It can be noisy, with a distinctive whinnying trill. They mostly eat insects, molluscs, tadpoles and small fish taken at depths to 1m.

Mute Swan: The Mute Swan is a distinctive, large white waterbird. It has a long S-shaped neck, and an orange bill with a black base, whilst in contrast, Bewick and Whooper swans have a straighter neck and a yellow bill. The population in the UK has increased recently, perhaps due to better 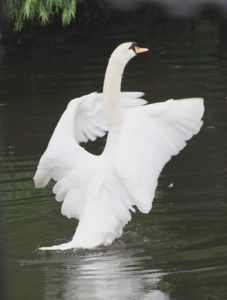 Swan on the Foss photographed by Martin Hathaway

protection of this species. The problem of lead poisoning on lowland rivers has also largely been solved by a ban on the sale of lead fishing weights. Some birds stay in their territories all year, while others move short distances and form winter flocks. Their diet consists of insects, snails and aquatic vegetation (to 1m deep). They also graze on grassland and occasionally take insects, molluscs and small amphibians.

Canada Goose: A large goose, with a distinctive black head and neck and large white throat patch. An introduced species from N America, it has successfully spread to cover most of the UK. It forms noisy flocks and is often regarded as a nuisance in areas where large numbers occur on amenity grassland and parks. Canada geese have proven able to establish breeding colonies in urban and cultivated areas, which provide food and few natural predators. Their success has led to them often being considered a pest species because of their depredation of crops and issues with their noise, droppings, aggressive territorial behaviour, and habit of begging for food. 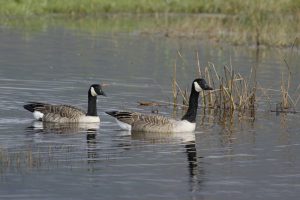 Canada geese are primarily herbivores, although they sometimes eat small insects and fish. Their diet includes green vegetation and grains. It feeds by grasping a blade of grass with the bill, then tearing it with a jerk of the head. In the water, it feeds from silt at the bottom of the body of water. It also feeds on aquatic plants. In urban areas, it is also known to pick food out of garbage bins 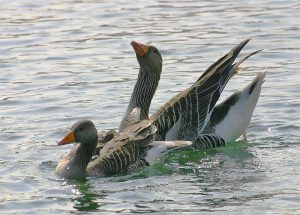 Europe, it is the ancestor of most domestic geese. The greylag is the largest and bulkiest of the wild geese native to the UK, though the population was re-established by releasing birds in suitable areas, with the resulting flocks (often mixed with Canada geese) found around gravel pits, lakes and reservoirs all year round. Only the native birds and wintering flocks found in Scotland retain the special appeal of truly wild geese. They have mottled and barred grey and white plumage and an orange beak and legs. Greylag geese are herbivorous and feed chiefly on grasses. Short, actively growing grass is more nutritious and greylag geese are often found grazing in pastures with sheep or cows. In wintertime they eat grass and leaves but also glean grain on cereal stubbles and sometimes feed on growing crops, especially during the night. These geese normally pair for life, so courtship only occurs at the time of first maturity.

If you would like to join in and help with our surveys of the birds around you, please have a look at the BTO website: