About The River Foss Society 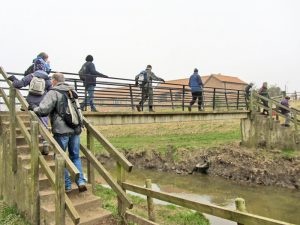 Walking across the Foss at Earswick

The River Foss Amenity Society was founded in July 1973 by a group of people led by York printer William K Sessions. At the Founding Meeting in New Earswick, he suggested that the proposed object of the Foss Amenity Society, as it was then, might be to focus attention on practical ways of improving the footpaths and other amenities of the river for the benefit of naturalists, fishermen, ramblers, and local residents. At this time commercial barges were still using the lower stretches of the Foss. They, as well as pleasure boats, should be taken into consideration.

The group Bill Sessions led was interested in the Foss for many reasons and promoted well defined all-weather footpaths for walking and a concern for the river’s natural environment by, for instance, planting more trees where appropriate. They would establish a harmonious relationship with all concerned, “including the local Parish Councils, the Ryedale District Council and the Ramblers Association”.

Since then, many of those early objectives continue to be met. Today’s River Foss Society tries to maintain the River as an amenity and resource for everyone by: