The history of the river Foss is entwined with the history of York. Together with the river Ouse, the Foss has played a vital role in the military defence of the city, and in its economic life, from earliest recorded times.

The Romans found that the Foss combined with the Ouse provided a natural defence, decided to build their fortress of Eboracum here; York started to become a major city. Recent excavations have proved that the Foss was later used, in turn, by the Anglo-Saxons and the Vikings for commerce.

In the fourteenth century the Merchant Adventurers built their hall upon its banks and during the following centuries York remained the residence of merchants and the commercial centre of the North, with navigation of the Ouse playing a vital part in commerce and the carriage of cargoes. 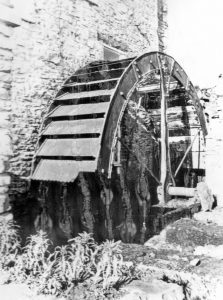 This water wheel at Stillington was once powered by the Foss

Outside the boundary of the city, the Foss has always drained a large area of countryside, having a catchment area reaching up to the Howardian Hills. In its upper reaches it provided water power for a number of mills from the twelfth to the twentieth century. An example of this can still be seen at Stillington where a former mill has been converted into a private home. 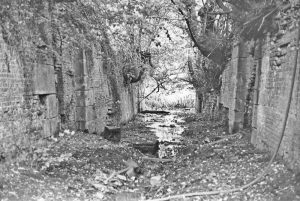 In 1793 it was decided to build a canal and so The Foss Navigation was formed with the intension of constructing a navigable canal from the confluence of the Foss and Ouse at Blue Bridge, York to Stillington Mill. Between 1796 and 1797 six locks and two bridges were constructed as part of this work. Strensall New Bridge (‘Old Humpy’) and John Carr’s Strensall Bridge taking the Sheriff Hutton Road over the Foss were constructed as part this work. 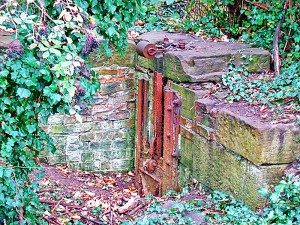 The river Foss was canalised and a new canal was dug north from Strensall to Sheriff Hutton Bridge. Due to financial limitations the work stopped in 1805 half a mile west of Sheriff Hutton Bridge. During its working life the canal carried important cargoes of coal, lime, farm produce and building materials. In 1845 the York to Scarborough railway opened, taking most of the cargo and revenue from the canal and causing its closure, although the Foss was used for some deliveries in the City into the 1970’s.

In a short walk along the River Foss you can still see the industrial archaeology left over from the canal era, including lock walls, sluice gates, winding gear and the historic Strensall bridges.