Bats of the River Foss and its Environs

There are plenty of bats to be seen along the Foss from dusk onwards, as well as in the gardens on either side of the river. It’s often very difficult to pick out enough detail to identify the various species you see, but hopefully the following notes will help you work out (probably!) which one you are looking at.

The drawings of bats on this page are the work of Tom McOwat, who has given us permission to use these drawings. They first appeared in the Spring 2017 edition of Wildlife Yorkshire.  Copyright for these drawings remains with the artist.

A Pipistrelle, the most common UK species. Illustration by Tom McOwat.

Common Pipistrelle: The commonest species of bat in the area. Likely to be seen at night close to all stretches of the Foss from its source to York City Centre. They roost in all sorts of buildings, as well as some trees, and feed on small insects such as midges.

Soprano Pipistrelle: Almost as common as the “common” species. It is particularly associated with rivers as it feeds on the small insects that are most often found around them, as well as in other freshwater habitats. Breeding roosts may contain up to 1000 individuals and are usually located in buildings, bridges or trees close to a river. 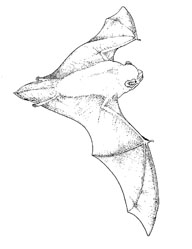 A Noctule bat in flight. Illustration by Tom McOwat.

Noctule bat: It emerges early in the evening and flies high and fast. It is a large bat feeding on bigger moths and beetles which it can often be seen searching for over the river at dusk. Their roosts, usually in hollow trees, are hard to find, but feeding and flying bats are quite widespread, even in York itself.

Brown Long-eared bat: Our third commonest species, but a one that is hard to spot. It feeds mainly on moths which are taken back to a perch to be eaten. It likes to roost in the roofs of large, old houses in the countryside and avoids areas with much outside lighting.

Whiskered bat & Brandt’s bat: Two species that are very difficult to tell apart. Individuals can often be seen at dusk foraging along hedgerows and tree lines looking rather like big butterflies. They are fairly widespread, but are found in their various localities only in small numbers.

Natterer’s bat: A species that sometimes roosts in bridges, but is more associated with woodland than watercourses. Seldom seen as it avoids light and only emerges when it is completely dark.

Daubenton’s bat: The species most associated with rivers. This bat feeds on insects that emerge from fresh water or just fall into it. They emerge around 30 minutes after sunset and typically fly just a couple of centimetres above the water surface, snatching insects from the water with their feet. If there is sufficient light you can see that they have dark backs and light undersides.

Thank you to John Drewett of the North Yorkshire Bat Group for providing all the information above.