A small group of walkers gathered at the Village Hall in Nunnington, for our latest expedition, a circular walk of around four and a half miles. Five humans and two dogs set off alongside the River Rye heading east, with views towards the grounds of the National Trust’s Nunnington Hall. Passing the impressive buildings of Mill Farm, we continued through fields to reach a minor road at West Ness. From here, a short distance on the road took us to a gently rising track known as Caukley’s Lane, which in turn led us to the literal high point of our walk, Caukley’s Bank. From here there were great views across to Hovingham and of the low ridge of hills running east to west above Castle Howard. After a short break at the Trig point for a photograph, we crossed the Hovingham to Nunnington road for a short distance to the west. Here we turned north, with great views across Ryedale towards KIrbymoorside and the Moors. A green lane descended gradually into Nunnington, where the stone cottages and colourful gardens were much admired. After a quick visit to the bridge over the Rye we finished the walk with refreshments at the excellent local tea rooms before returning to our vehicles for the journey home. Having missed a year in 2020 due to lockdowns, the weather gods looked kindly on 2021 as we had a great weekend’s weather for a great weekend of walking. At 10 o’clock, Saturday’s walkers congregated at Blue Bridge, before making their way through the gradually filling streets of York to follow the Foss through to the nature reserve on Foss Islands road. Joining the side of the Foss once more at the end of Monkgate, we were able to spot the delightful miniature houses of the Foss fairy trail, made with such care and attention to detail. As we passed out of York proper into Huntington and New Earswick we gained four more walkers, three of them with four legs! There followed a lovely riverside walk from All Saints Church, Huntington, to Haxby, and another from Towthorpe bridge to Strensall, separated by a short road section caused by gaps in riverside rights of way in the area. Reaching Strensall at an appropriate time for a break, we gave some custom to the Ship Inn, before eating our sandwiches in the grounds of Strensall Village Hall. With the footpath along the Foss still closed due to bank collapse, we took the ‘traditional’ Foss walk through Strensall past Walbutt’s to cross the (much smaller) Foss again via a metal bridge. Tracks and minor roads then took us north towards Sheriff Hutton, before a sharp left turn actually took us to very near Sheriff Hutton Bridge cricket club, who were playing a match in the bright sunshine. The path next to the Foss at this point was chest deep in nettles, so a brief road diversion was suggested by the (shorts wearing) leader, to rejoin the main path at Foss House. From here farm tracks and paths led us through to Black Collar Farm, on the outskirts of Farlington, where the footpath (deliberately) crosses a very well-tended garden. Emerging into the centre of Farlington, we arrived just in time for a drink at the Blacksmith’s Arms, whose landlord had kindly allowed us to park our cars there, in order to travel home. The drink was very refreshing, and six walkers (and a dog) stayed on for an excellent bar meal in the garden.

The next morning saw most of the walkers from the previous day return to Farlington, with the addition of four more, meaning that thirteen walkers and three dogs set off on another lovely sunny day. Passing through Marton on the Forest on the way to Crayke, we began to rise gradually, gathering good views back towards York, as well as towards our next objective, Pond Head reservoir. Pond Head made a lovely spot for lunch, and also marked our departure from the Foss, although we did join the river Kyle just out of Oulston, where a delightful bench surrounding a shady tree gave much needed respite from the bright sunshine and cloudless sky. There followed a walk through agricultural and equestrian areas, before we traversed one final nettle-strewn path to reach the lane into Easingwold. After a group photograph in the Market Place, several walkers re-hydrated in The George before using transport left in Easingwold to return to pick up cars in Farlington. Considering the lack of foot traffic due to various lockdowns, the walk was surprisingly clear, (apart from the nettles near Sheriff Hutton Bridge) the waymarking useful, and without too many obstacles in terms of over-friendly livestock or thickly planted crops. The statistics (with thanks to Philip Mander) were:

It was encouraging to see such a good response to the walk this year, and thanks to all who made the journey with me. 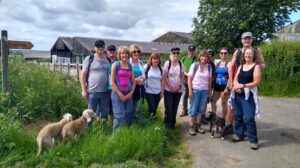 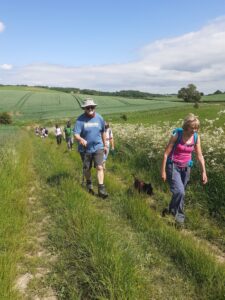 An encouragingly large group of fourteen walkers (and three dogs) braved a particularly grim weather forecast to awake the RFS walking programme from its lockdown slumbers starting from All Saints Church, Huntington. Having been warned in advance about wet conditions underfoot, the party coped well with the muddy paths alongside the York to Scarborough railway line,.

A few members rounded off the walk with refreshments at the Hound Lounge café, on Sleeper’s Path. Despite the forecast, the weather remained mostly dry. Members are encouraged to join the next RFS walk, in the evening of 8th June, at Dunnington: please contact Anne Bednarski for details. 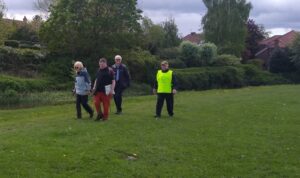