A lot of members collect litter as they walk alongside the Foss, either as a useful adjunct to their walk, or as its main purpose. Without these efforts I can’t imagine what state the riverbanks would be in.

Tim went one stage further and used a grapnel to haul out a selection of old bikes and supermarket trolleys – the latter appearing in the river ever more frequently now that Covid has forced the supermarkets to abandon the £1 coin clamps. He said that the trollied came in handy to carry the rest of the rubbish to CYC’s boat.

He tried to return the trolleys, but the supermarket said that as they were contaminated, they could not accept them. I feel a campaign coming on! Fifteen minutes with a cleaning agent followed by a good sanitiser would save another pile of mixed metal needing to be recycled. 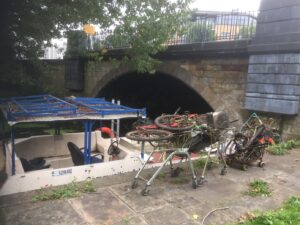 Rubbish hauled from the Foss by Tim Rane