A Huntington resident was walking the Foss with his grandchild and found these mussel shells.  We contacted a Professor in Archaeological Science who says that these are probably the swan mussel, (sp. Anodonta cygnaea). 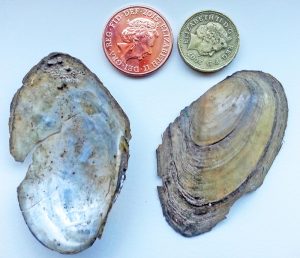 Mussel shells found on the Foss

common in the Foss.  Intriguingly, this species appears suddenly in York’s archaeological record about the time (soon after 1069) that the Kings Fishpool was being dammed.

Has anyone else found similar shells? Please do let us know, as it is useful to know what species are populating the Foss.