There have been several questions recently about weed in the river. There is a lot of a filamentous alga growing and in some places a surface covering of duckweed is developing. Duckweed, though the individual plants are tiny, is a flowering plant, unlike the alga.

Both these are quite normal and tend to occur when flows are low, as now. The Foss is a nutrient rich river because it is fed by farmland (and several sewage plants) and that encourages algal growth.

This is not an algal bloom, which happens when single-celled algae turn the water murky and is bad for plants in the water, such as water lilies, and other wildlife, but the Foss water is still clear which is a good sign.

There are plenty of fish too! 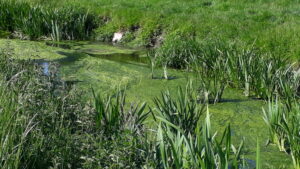