The RFS has for quite a while been trying to get the waymarking of the Foss Walk improved and the path maintained. Council budgets did not allow for such activities before Covid, thanks mainly to government cuts, so now it’s going to be impossible for the foreseeable future. We’ve been talking to NYCC for a while and the culmination of this is that we have their blessing to go ahead and waymark, and later to do some path clearing.

The City of York Council have not responded to our approaches, so we are still trying to get some form of agreement for the lower reaches of the river.

Tuesday last, three members made a good start on waymarking  despite the rain. They started at the iron bridge at Strensall, which is the North Yorkshire County Council boundary and finished at Foss House.

The next  section to tackle is Foss House to Farlington. 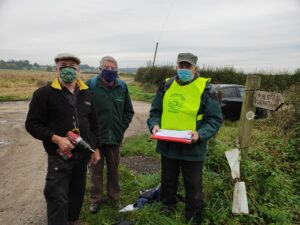