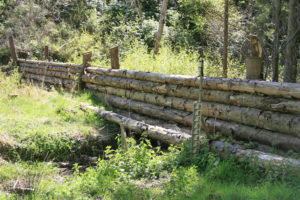 One of the Pickering dams with a measure for water depth

A small group from River Foss Society visited the Pickering Flood Alleviation Scheme on 4 May. We were welcomed and given an excellent talk and tour by Philip Roe, Area Forester for the Yorkshire Forest District of the Forestry Commission, for a very informative and enjoyable day. The glorious weather only added to it!

We began with a briefing explaining what the flood alleviation scheme is, how it came about, and how it works. I don’t think any of us had appreciated the amount of planning, preparation and work that went on behind the scenes before anything visible happened.

It works by holding back peak river flows using dozens of small dams made using trees felled within metres of their final situation, and which fit superbly into the landscape. They are in effect a copy of nature’s own way of holding back water with fallen trees. Each costs little to construct, and most hold only a small amount of water, but added together the effect is significant.

In addition to the more visible dams, several hectares of trees were planted, ditches were disconnected from the river, and dozens of heather bales were placed in moorland streams; all aimed at slowing the flow of water.

All of these small features are backed up by a bund (an earth wall) close to the town and right next to the NYMR. This encloses a section of flood plain creating a small reservoir which temporarily holds back yet more water.

The scheme has prevented quite a few houses in Pickering from being flooded during recent heavy rainfalls and can only be called a success. It is alleviation, not a cure, but is a cost effective way of minimising frequent flooding and the misery it brings.

After the briefing we were taken on a tour of three sites, plus the bund, so that we could see for ourselves how the various different dams work, and appreciate just how well they blend in. The combination of forest scenery and sunshine made this a real pleasure as well as an informative occasion.

So far as the Foss is concerned, a Pickering-like system is unlikely to help us much. Our catchment is flat, so any rise in water level would cover large areas of land, and whilst the Pickering team had only three landowners to work with, the Foss is surrounded by dozens. Lower down on the Foss we also have to contend with the rapid run-off from three major areas of housing in Strensall, Haxby/Wigginton and Huntington.

What is going to be the best way to slow the Foss at peak flow times? There are many ideas being considered, and the RFS will continue to look at what is being done around the country to see whether there is anything relevant to us.