An Introduction to Eutrophication.

Aquatic eutrophication (from the Greek, meaning ‘well nourish’) is the enrichment of natural waters with plant nutrients, which results in the stimulation of an array of symptomatic changes. These include the increased production of algae and other aquatic plants, affecting the quality of the water and the balance of organisms present within it.

The nutrient status of any natural water is determined by their supply from its catchment, which in turn is influenced by the geology. Some waters are naturally eutrophic others, such as the Foss, become of concern when human activities accelerate the enrichment process.

The growth of plants in natural waters is influenced by the supply of nutrients, light, temperature, flow regime, turbidity, zooplankton grazing and toxic substances.

Nutrient sources can be broadly segregated into two categories: readily identifiable point sources (such as sewage effluents), and diffuse sources (such as the run-off from agricultural land). The contributions (in percentage terms) of the main sources of phosphorus entering surface waters in the UK have been estimated as: –

For nitrogen, inputs to fresh waters in Europe come principally from diffuse sources, particularly agriculture, although point sources (usually urban wastewater) also contribute significantly in many regions. In England and Wales 70% of the total input of nitrogen to inland surface waters is estimated to come from diffuse sources (agriculture, precipitation and urban run-off, in order of decreasing importance). The remaining 30% comes from sewage effluent and industrial discharges.

Eutrophication can have both temporary and long-term effects on aquatic ecosystems. Large fluctuations in dissolved oxygen concentrations can occur between day and night. Low oxygen levels, the result of plant respiration, may lead to the death of invertebrates and fish. This process can be compounded when algal blooms, through their decay, further reduce the oxygen content of water. The growth or decay of benthic (bottom-dwelling) mats of macro-algae can also lead to the deoxygenation of sediments.

Eutrophication ultimately detracts from biodiversity through the proliferation and dominance of nutrient-tolerant plants and algal species. These tend to displace more sensitive species of higher conservation value, changing the structure of ecological communities. It can also adversely affect a wide variety of water uses such as water supply (e.g. algae clogging filters in treatment works), livestock watering, irrigation, fisheries, navigation, water sports, angling and nature conservation. It can give rise to undesirable aesthetic impacts in the form of increased turbidity, discolouration, unpleasant odours, slimes and foam formation. 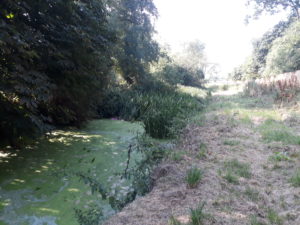 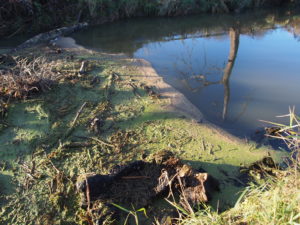