As our photo shows, the Environment Agency’s eel pass in the weir at Castle Mills lock is now up and working. 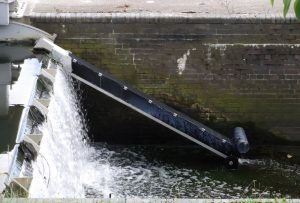 While we are not aware of any evidence of their presence in the Foss, this is good news for eels, which are an endangered species.   Eels’ life cycle involves long migrations between rivers and oceans, but without the pass, Castle Mills lock and weir would be a complete block to eel movements up and down the Foss, except at times of flood.  There is still an air of mystery about eels, although our knowledge of them has moved on a good deal since this seventeenth century poet took up his pen! We look forward to reports of eel sightings in the river.

Strange the Formation of the Eely Race,
That know no Sex, yet love the close Embrace.
Their folded Lengths they round each other twine,
Twist am’rous Knots, and slimy Bodies joyn;
Till the close Strife brings off a frothy Juice,
The Seed that must the wriggling Kind produce.
Regardless They their future Offspring leave,
But porous Sands the spumy Drops receive.
That genial Bed impregnates all the Heap,
And little Eelets soon begin to creep.
Half-Fish, Half-Slime they try their doubtful strength,
And slowly trail along their wormy Length.
What great Effects from slender Causes flow!
Congers their Bulk to these Productions owe:
The Forms, which from the frothy Drop began,
Stretch out immense, and eddy all the Main.