We seem to be back with a green river, rather as last summer, so I thought that I’d revive the post from last year for those who did not see it.

The RFS having had many queries about the duckweed that is covering much of the river, particularly in its lower reaches, the Environment Agency was asked for its advice. The following is the statement they kindly provided ; hopefully it should answer most people’s questions.

“Many people think that duckweed is unsightly, which is a matter of opinion, and a sign of pollution, which is untrue. It is a sign of low river flows, partly due to lack of rain, and a river that is enriched by nutrients. All of these are issues that people should be aware of as part of public environmental awareness – the situation is there for all to see.

Duckweed, which is not algae but a flowering plant, is usually found in ponds and still water sites. It can grow in rivers when flows are very low and the river begins to behave like a pond and water temperature rise (at least at the surface). This summer has been hot and rainfall has been low, conditions that suit duckweed growth. The River Foss is also slow flowing at its junction with the River Ouse because the lock gates at the Foss Basin act as a barrier and because the Ouse has a larger volume of water and faster flows, causing the smaller river to “back-up”.

Duckweed is not the result of pollution, although it thrives in water that is enriched, and it is not seen as a major problem that needs action to be taken to remove it. It should die back in autumn and be flushed away when river flows improve. If it is treated with a chemical herbicide it will die and decompose but this will use up much of the oxygen in the water and cause fish and other aquatic species to die.

Duckweed can cause problems for anglers when it forms a thick mat across the river in that fish are no longer visible and it “clogs up” fishing line, landing and keep nets and other equipment, it does however provide cover for fish and smothers algae, which use up oxygen and can produce toxins. Duckweed produces oxygen during daylight hours and it take in nutrients from the water reducing certain pollution levels (such as nitrates and phosphates). It also provides food for some fish and bird species.” 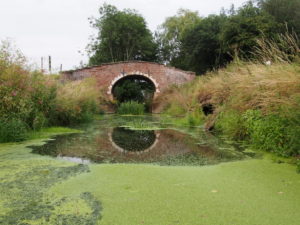